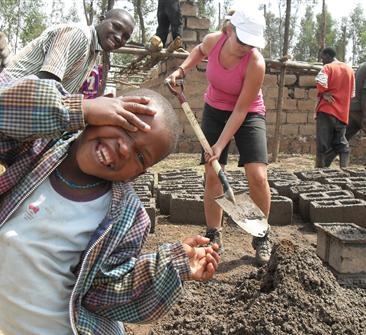 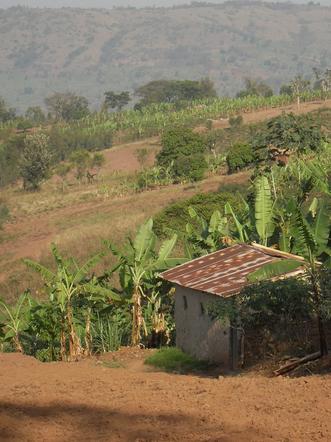 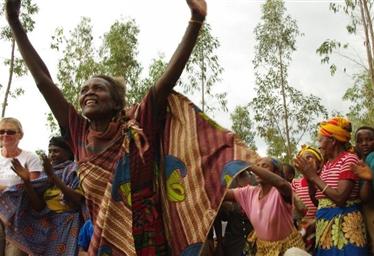 Rwandans call white people Muzungu.  This is almost a term of endearment these days, but originally, when the Belgians first colonized Rwanda and told the Tutsi they were superior to the Hutu, giving them positions of power in their new regime to prove it, whites were thus called because it meant people that walk around and do nothing, as the colonialists were great at doing.

The brickmakers, bricklayers and other locals eyed us with a hint of suspicion when we first ambled onto the construction site, taking photos of the beautiful landscape: the land of a thousand hills, where banana groves cut swathes of brilliant green through the orange brown earth and wave bright green banana leaf flags like millions of patriots in the sun, proud of their land where nearly every inch is cultivated by hand. Perhaps we looked like we might well walk around and do nothing at first. I was paralysed with awe seeing the landscape of my novel, which until now had resided in my imagination, come to life in all it’s 3D Technicolor glory. 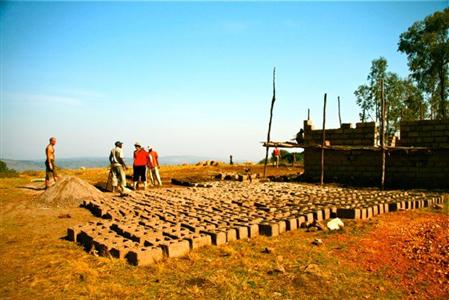 When I told the receptionist at the travel clinic I was going to Rwanda she pulled a face which made me think I had unconsciously said Iraq or Afghanistan. After receiving similar responses from many people I realised that it couldn’t possibly be some slip of the tongue on my part every time. It was, in fact, the well documented matter of there being a genocide of the minority Tutsi population by the Hutu majority in 1994. It was one of the most horrific massacres of its kind in modern history: nearly one million people killed in one hundred days. And not all of them Tutsi. Those moderate Hutus that did not condone or participate in the killing where killed themselves. Many Hutus were stuck between a rock and a very hard place. But that was 1994.

It was after seeing Shooting Dogs, one of the films of recent years to dramatise those events in Rwanda, that I became compelled to write The Go-Away Bird.  Not specifically because I wanted to write a piece about the genocide, but because it had made me acutely aware that everyone I knew (and everyone I didn’t) in ‘Western’, society, myself included, was obsessed with creating problems for themselves, living as we do in a society that affords us no real problems: not the kind of life and death problems of survival, concerning subsistence or war, that many African peoples have to deal with on a daily basis, as much now as in 1994.  That is why just about all of the characters in the ‘London chapters’ of my novel abuse themselves in some way, be it through cutting themselves, taking prescribed or illegal drugs, or even watching Jeremy Kyle-type TV.  When it came to the ‘Rwanda chapters’ I knew I was getting into controversial territory, writing about a place I had never been to and about characters so opposite to me in their demographic, in a literary world where authenticity is, rightly, everything.  But as a struggling writer there was no way I could afford to make a trip to Rwanda; I wouldn’t even know where to start if I could.  Besides, what’s wrong with a bit of imagination?  Ironically, it wasn’t until the book was virtually ready to print, that I could afford to go to Rwanda.  But I didn’t want to just rock up to a swanky hotel in the finer part of Kigali and jump on some sterile tour of the national parks and village craft shops.  I wanted to experience the rural life I wrote about in the novel; the kind of routine that involves walking an hour twice a day to collect water, seeing by candlelight when the sun goes down, staying as clean and well presented as many Rwandans do without the aid of running water and electricity.  And, as syrupy as this may sound, I wanted to try to give something back to the country that had unknowingly done so much for me as a writer. 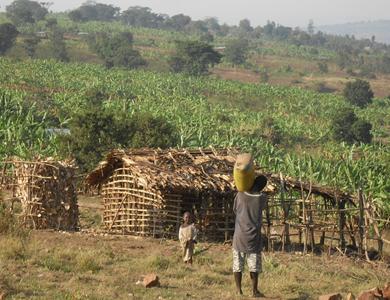 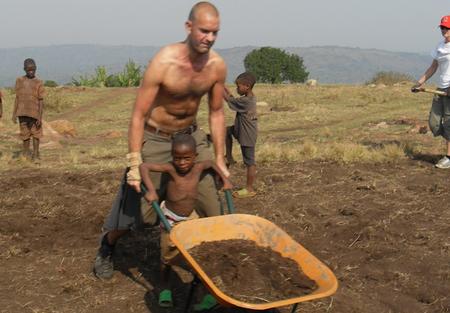